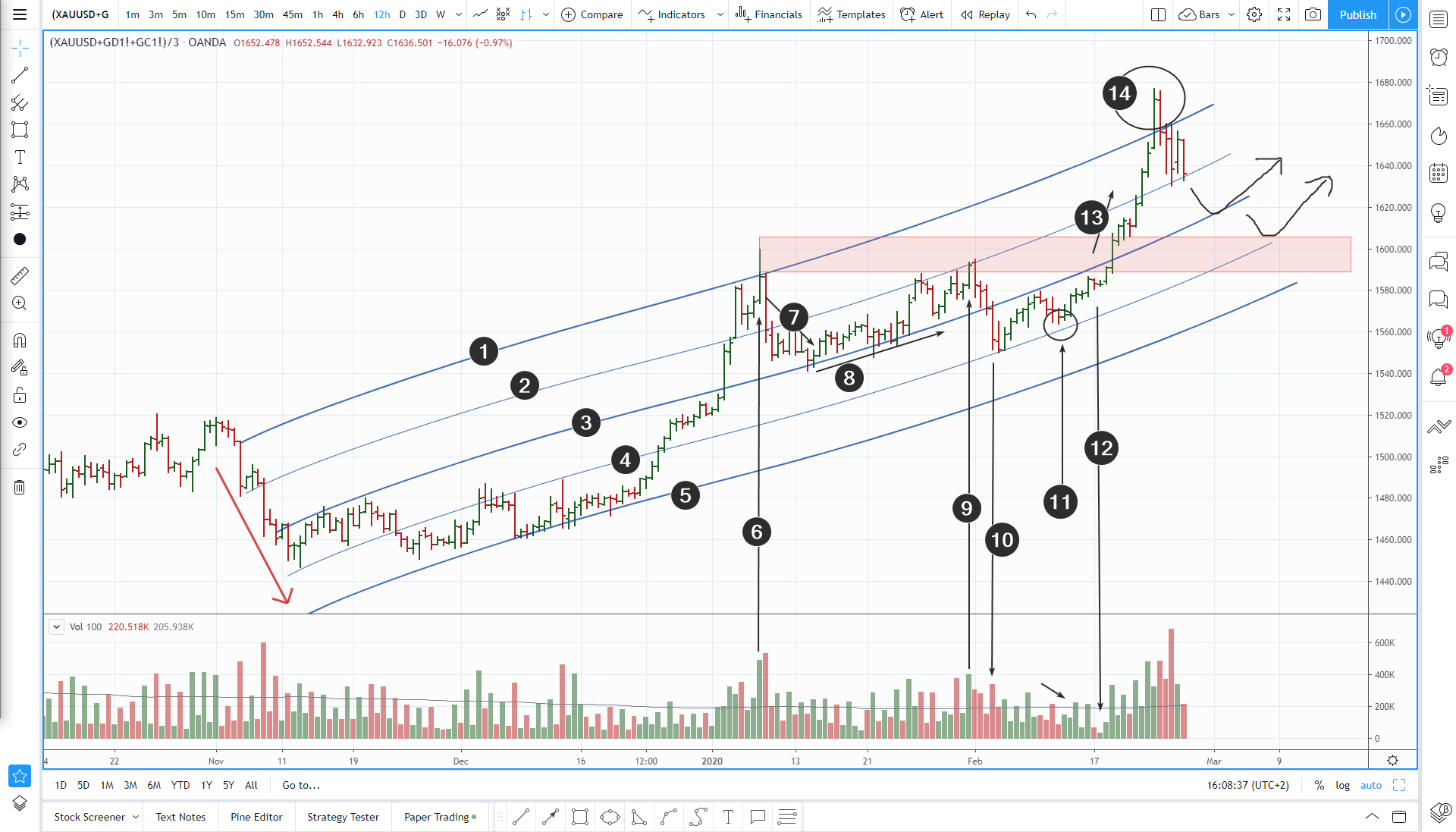 Here is the 12h chart. I mixed data from 3 sources – CME and MOEX exchanges, Oanda broker.

I plotted the 5 wave-lines of the up-trend channel:
1] Overbought
3] Center Trend-line
5] Oversold
[2 and 4] – intermediate lines.
Note, the up-trend started (as always) from the “initial down-move” (bold red arrow).
Red Square – an important price zone. It was formed around 1600 – psychological number.

6] on 08/Jan, the price entered into the overbought condition and made the first touch with the Red Zone. The volume was very high on this up-bar. It was a high activity caused by a notable event in the media. “Gold price surges amid geopolitical uncertainty” – screamed headlines. Google Trends registered a spike of popularity of the “gold price” topic. This is typical for FOMO Euphoria. Not surprisingly, we got …

7] … a pullback from the January highs around 1600.
8] Actually, the price found support around the center-line of the trend-channel. This is an important line, the ‘heartbeat’ of the trend.
9] With the help of the center-line, bulls made the second attempt to overcome major red zone. But we got this extra-high up-bar with the immediate reversal on the very next red bar. If the volume behind the bar [9] did represent the bullish activity, why did the price close so low on the next bar?

So, the second attempt failed.
In order to overcome the major 1600 red zone, bulls constructed…
10] …this manipulation move (Shake-out, or artificial minor Panic). This move found support around line [4].
11] The test of the panic [10] Zone. Classical tech analysts would describe this pattern as ‘cup and handle’, but I’d like to interpret it as “exhausting of selling pressure in the former Panic levels” (bullish indication).
12] Final preparation. A minute of dead silence before the explosion. Micro No_Suplly activity before the breakout.
13] The third attempt succeeded!
14] Again overbought (like it was on 08/Jan)

So what?
Currently (from 12h view), the market is developing the pullback from the overbought zone. The line [2] is providing (temporary?) support. We have a lot of support levels below the current price. These levels increase the reiteration of the scenario “overbought-pullback-resuming_uptrend”.

Watch for the bouncing from the center-line or Red Zone (Now Should act as the Major Support).